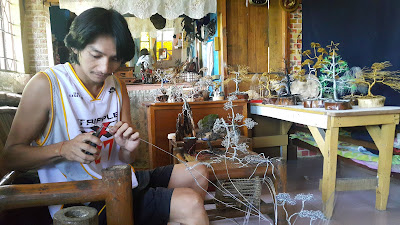 Benguet Province, Philippines. A young miner and a father of a four-year-old boy found wire art when monsoon rains and typhoons devastated Itogon, Benguet, and affected their livelihood. 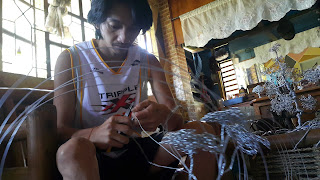 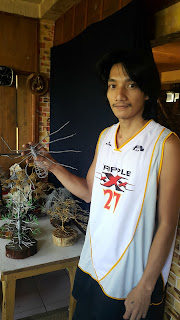 Last week, I made a short ride to Dalicno to visit this miner who is also a distant relative of mine. Kenneth Jones Pulsingay started experimenting with wire art during the month-long typhoon Habagat where he created insect-shaped designs like spiders and scorpions for his four-year-old son’s toys. When relatives saw his works, they encouraged him to create bigger designs. He started to make bonzai-like trees made of wires. 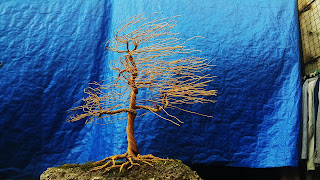 Surprisingly, even without any formal training, he was able to make exceptional artworks. Timely with the order to stop small-scale mining, his relatives encouraged him to continue hoping this will help the family start a new livelihood. 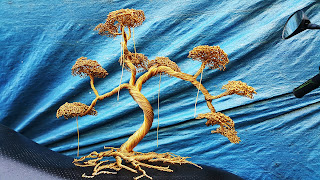 Pulsingay said what moved him to create these wire arts is to have something to give his boy to play with as he can’t afford the expensive plastic toys. Some of the materials he used were rusty wires he found lying around. The further improvement of his crafts, he credited to his relatives and neighbors who encouraged him to make more. They bought him raw materials to start with.
This shy young man from the Kankanaey tribe in Dalicno, Itogon shows passion in his arts creating masterpieces that are life-related. His Ompong tree shows the strength of the typhoon that caused havoc to the northern part of the country, but it also shows the unbent resilience and resolve of the people that were represented by the still-standing tree. 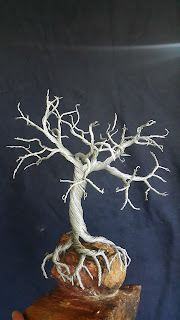 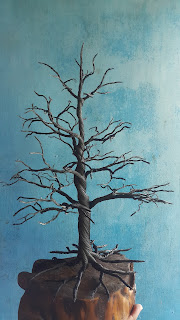 His Waka-waka tree was derived from the vines hanging on trees, which is called “waka” in Kankanaey. A coconut wire tree perched on an island with a real coconut shell that made the island.
His mother Agnes who was an innate artist herself said Kenneth was always fascinated with unusual objects like strange-looking trees. “He started keeping tree roots for functional decorations and even created a house-like shell bank made of scrap woods when he was young and gave to me as a gift,” she said.
Relatives say he got his art instincts from his mother who has also no training in art but was able to create exceptional painting decorations on their walls. She is helping Kenneth design the base of his wire art from found things from the forests and these too are works of art.
Several individuals supported Kenneth’s artworks while mining is still banned. If things go well, he may not have to go back to mining.