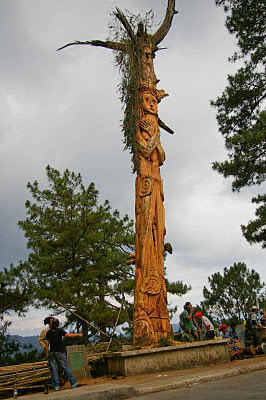 Led by Baguio born international artist Kawayan de Guia, 4 Baguio artists, and 7 Ifugao carvers joined forces to give new life to Baguio’s oldest tree and became one of the sights to see in Mines View. Alfonso Bucalen Jr., Jayson Domling, Ashley Velasco, and Kawayan’s father Kidlat Tahimik worked with Ifugao carvers for 2 weeks to give a new face to the celebrated century-old tree that was declared dead a year ago. The woodcarvers all hailed from Ifugao are Christopher, Derick & Ceasar Atiwon, Totoy Butic, and Apiles Mahiwo, all from Hapao, Hungduan.

Their team leader Santos Bayucca is from Banaue. A simple ceremony was held last Monday to inaugurate the project where some tourists stopped by to get a photo of the once-celebrated century-old pine tree now turned totem pole. Following a Cordilleran tradition, a chicken and a pig were butchered as sacrifices to the spirits to continue protecting the tree. Eighty-four-year old Kalanguya “Mambunong” Gabino Bandao interpreted the chicken’s bile “as a good omen that the tree will be protected.” The pig’s bile on the other hand was interpreted as a good omen for the carvers and artists who worked for the project. Bandao also said that “it’s a good sign that the tree will affect the surrounding people in a positive way.” 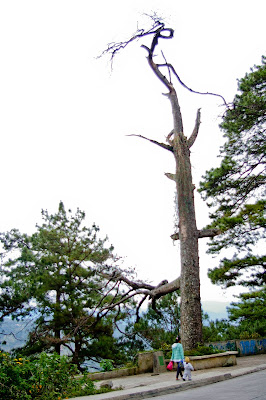 The centennial pine of Baguio said to be 200 to 500 years old died because it was supposedly struck by lightning, others said that its death was hastened by careless contractors who cemented the pavement where its root was. The tree was declared dead a year ago by the Department of Environment and Natural Resources. De Guia’s group had been visiting the tree when it was still alive. “We made a vow about 5 years ago to make something out of the tree when it dies,” the young de Guia said.

The workers carved Cordilleran symbols and images to honor the tree. The main image is a woman they called “Iddaya”, Ifugao’s name for a generous rich woman. On top of her head is a “Dongdong”, a hair accessory used by rich brides in Ifugao. On her hips is a pair of “Hagabi” images, a resting bench for the rich with the elevated resting board on one side for the feet. On her feet is a hut symbolizing the Cordilleran family home. On the other side is a hunter, a typical profession of Cordilleran males in the olden days. On the hunter’s foot is a dog, a common companion for hunters and on the left is a deer which is the favorite game of hunters. 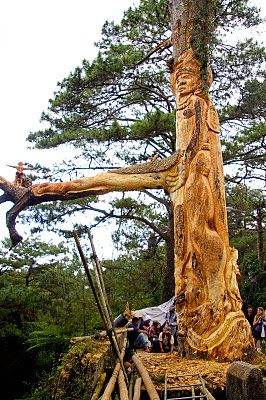 The woman pounding rice represents the regular workers while the chicken and the monkey are common pets found in many households.

The small child looking beyond the mountains is called “Butik” which represents someone from the hinterlands.

The snake and the “idu” or bird are both used for omens. If one crosses your path on a journey, it would mean bad luck and it is a sign that you should not proceed.

Another design is the ever-present image of a lizard prominent among Cordilleran artists. This image represents a lot of interpretations depending on who you’re talking to.

The “bulol” a rice guardian, is a common wood carving among the Ifugaos believed to protect their granaries from pests. The “Bitog” or “ling-ling-o” in Mountain Province is a symbol of fertility.

When the carving was done, it was cured to prevent decay. De Guia said, “they will continue to monitor and treat it further when necessary.”

This carving is a legacy that is sure to become an attraction and will probably become Baguio’s most photographed tree. The creators hope that this tree will not only become a famous photography subject but as one of the artists hope, “it will be an educational tool to incite tourists’ interests to learn more about our cultures and traditions.” Carl C. Taawan

Update: This artwork was unfortunately washed out during a strong typhoon and only stories like this are the testaments of its existence. 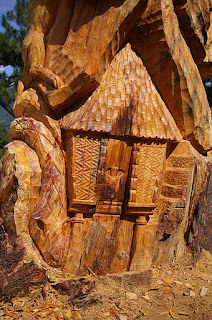 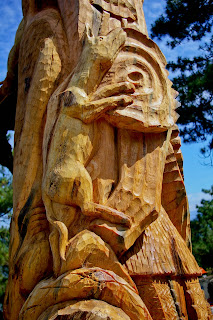 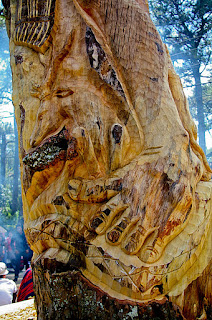 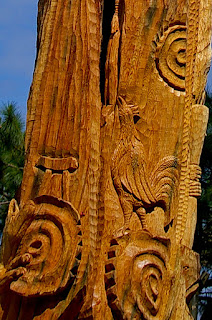 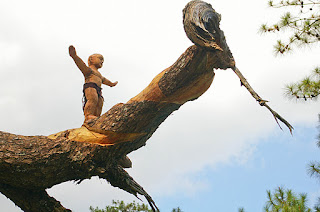 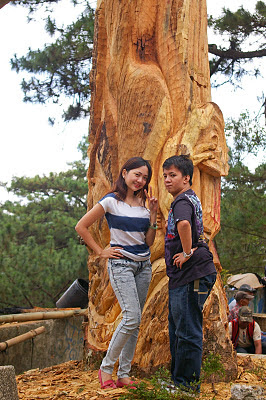 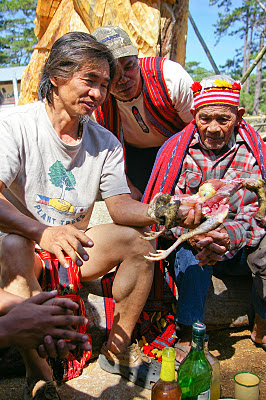